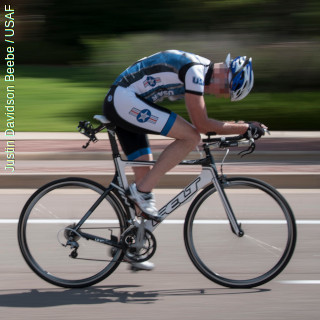 You've seen those amazing, Olympic cyclists leaning forward, crouching, head-down into a snug, aerodynamic position to shave every possible second off their time? The only real problem is if they hit something and crash. Riding with your head so far forward means it's much more likely to bear the brunt of the impact when you smash into the road. Head injuries are really bad news. According to the US CDC: "1000 bicyclists die and over 130,000 are injured in crashes that occur on roads in the United States every year," while some 60–75 percent of deaths involve a head injury. [1] Thank goodness, then, for bicycle helmets. Like your favorite candy, they're hard on the outside and squashy in the middle—and that two-layer design helps them absorb impacts and save your life. Let's take a closer look at how they work!

Photo: When cyclists lean forward to create a more aerodynamic shape, it automatically puts their head at greater risk of injury in a crash. That's why wearing a helmet is important. Note how this rider's helmet helps to create a much more aerodynamic shape for his body by smoothing out the transition between his head and the curve of his back. Photo by Justin Davidson Beebe courtesy of U.S. Air Force.

How does a bicycle helmet work?

At first sight, a cycle helmet looks much like any other hat, but look more closely and you'll see a lot more thought—and science—has gone into the design. A typical helmet has two main parts: a hard outer shell and a soft inner liner. The hard shell is designed to spread the force of an impact over a broader area so your skull is less likely to fracture, while the soft liner is meant to squeeze inward and absorb the impact energy, so less of it is transmitted to your head.

Artwork: How a helmet saves your life: When you bump your head, the hard outer shell (black) spreads the impact over a wide area. The whole of the soft inner liner (orange) then absorbs the energy evenly so (hopefully) there's minimal damage to your head. Without the helmet, the entire impact would be concentrated on a tiny part of your head, very likely fracturing your skull and quite possibly damaging your brain too.

Bicycle helmets are a good example of how the right material can make all the difference to how well something does its job. Shells are typically made of composite materials like fiberglass or lightweight carbon fiber, or very hard plastics such as polycarbonate or ABS. Liners are usually about 20mm (0.8 inches) thick and made of two layers of foam: a soft, bouncy layer that absorbs small bashes and bumps and a stiff layer that permanently deforms to absorb very hard impacts. Some helmets are now incorporating energy-absorbing plastics like D3O® that are soft in normal use but harden instantly the moment you hit them, but most still use cheaper and simpler materials like expanded polystyrene (EPS) or expanded polypropylene (EPP). 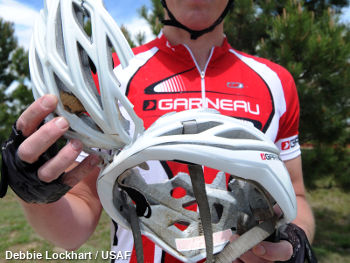 Photo: The badly torn remains of this cycle helmet soaked up the energy of an impact. This cyclist suffered serious injuries in a crash, but his helmet saved his life: a smashed helmet is better than a smashed head. Photo by Debbie Lockhart courtesy of U.S. Air Force.

Structure of a typical bicycle helmet

In some ways, the human body is like a smokestack: lots of the heat our bodies lose disappears straight up through our heads. We wear woolly hats on cold days to keep the heat trapped inside. But by the same token, wearing any kind of close-fitting hat on a hot day can really make you perspire. That's why bicycle helmets generally contain lots of ventilation holes. The trouble with punching holes in things is that it makes them structurally much weaker, so the vent holes in cycle helmets work directly against the job they're designed to do (protecting your head). Not only that, they also disrupt the airflow over the helmet, causing turbulence that slows you down. Designing a decent bicycle helmet involves a careful balance between protecting your head, keeping you cool, and making you aerodynamic enough to go reasonably fast. 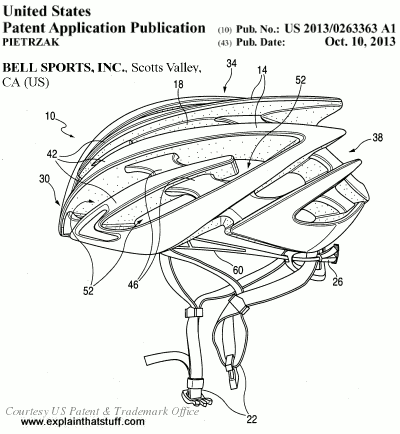 Artwork: From US Patent 20130263363 A1: Protective bicycle helmet with internal ventilation system by Chris T. Pietrzak, assigned to Bell Sports, Inc., granted October 10, 2013. Courtesy of US Patent and Trademark Office.

Here's a recent helmet from Bell Sports of California, with a novel design for maximizing airflow and ventilation around the rider's head, while retaining strength and reasonable streamlining. I've kept Bell's numbers on the artwork, but provided my own simplified descriptions of them. The front of the helmet (the rider's nose) is on the left.

The best helmet isn't necessarily the one that looks cool; it's the one you're most likely to wear. If it looks brilliant but feels uncomfortable or gets too hot, you're less likely to keep it on your head—so it's a waste of time. The most important things to think about when you buy a helmet are:

It may sound strange, but the last one of these is probably less important than the others: the best helmet in the world is no good at all if it's too hot or uncomfortable for you to keep it on your head. But assuming you find a helmet that fits, looks good, and you're definitely going to wear, make sure it meets the toughest test: that's the US Consumer Product Safety Commission (CPSC) bicycle helmet standard. There are other, lesser standards you don't need to bother with. If a helmet doesn't meet the CPSC standard, don't buy it. 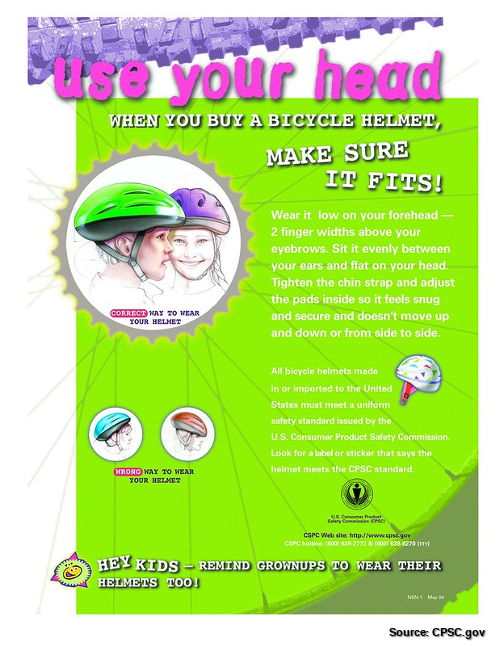 Photo: A bicycle helmet must fit properly and be worn the right way (low on your forehead) if it's going to be of any use at all. Poster courtesy of U.S. Consumer Product Safety Commission published on Flickr under a Creative Commons Licence.

When should I replace a helmet?

You can buy a new helmet anytime you get sick of your old one, but you must always buy a new helmet if you have a crash. If you crack your helmet or compress the foam, it's not going to work properly the next time—so get rid of it! For the same reason, never buy secondhand helmets in thrift stores, from friends, or on places like Web auction sites; you don't know what they've been through already and whether they're still going to give you the protection you need.

Do I really have to wear a helmet?

People used to think bicycle helmets were uncool, but that's all changed now. You won't find any professional cyclist racing on the road or a track without a helmet clamped firmly to their head. And helmets are so much better than they used to be. Have you noticed how cool Olympic cyclists look in those teardrop-shaped chrono hats? Virtually all modern cycle helmet are amazingly swish and can make even the slowest of riders cut a dash. One word of warning, though. Everyone wants to look good, but remember that a cycle helmet is primarily about protection. Fussy, elaborate extras are usually just marketing gimmicks—so don't waste your money.

Do bicycle helmets really save lives? 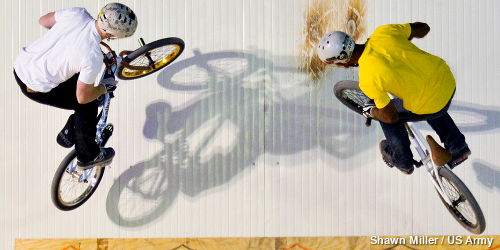 Photo: The best helmet for you depends partly on how you ride. BMX riders prefer ones like this, which are more like climbing and skating helmets with full ear protection. You're not cycling so fast in BMX, and aerodynamics and ventilation are much less important than effective, all-round impact protection. You're guaranteed to fall off if you do this kind of riding so a good helmet is really important. Photo by Shawn Miller courtesy of US Army and Wikimedia Commons.

There is an argument that helmets don't make as much overall difference to how many people are killed or injured in bicycle accidents as you might expect. People who study the psychology of risk point out that if we make ourselves feel safer (with helmets on bicycles or seat belts and airbags in cars) we ride or drive more dangerously and put ourselves at greater risk of an accident—so the two factors cancel out leaving us no better off.

Could helmets put people off cycling?

There's another problem too. Society has become much more safety-obsessed and risk-averse, and that's often neither a good thing nor a rational one. Some people will look at cyclists hurtling by in helmets and high-visibility jackets and conclude that it's far safer to sit at home or take the bus than to venture out on the road. In other words, cycle helmets could deter people from cycling altogether—making them miss out on the health benefits of the excellent exercise it provides. If we consider society as a whole, inactivity and lack of exercise could actually pose a bigger risk to health than injuries and fatalities caused by cycling. So whether helmets save lives overall is actually a much more subtle and complicated issue than it first appears—and it's especially contentious in countries such as Australia where helmet wearing is compulsory.

This argument has been forcefully made by Australian researcher Bill Curnow in a variety of papers, including Bicycle Helmets: A Scientific Evaluation [PDF]. Chris Rissel, Professor of Public Health at the University of Sydney, argues that "... the benefits of cycling outweigh the risks, with helmet legislation actually costing society more from lost health gains than saved from injury prevention." Others argue that the risk of putting people off cycling is less relevant than it might appear. In a recent review of 21 separate studies, Alena Høye, from the Institute of Transport Economics in Norway, has suggested: "People who may be deterred from cycling are among those with the highest injury risk and the smallest health effects from cycling." 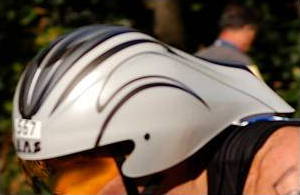 Photo: An aerodynamic chrono helmet being worn by a triathlon rider. The teardrop shape reduces air resistance around the rider's head, which means it has a smoother surface and fewer ventilation openings than on a typical road cycling helmet. Photo by Suzanne Day courtesy of US Air Force.

What do the studies say?

It's difficult to argue that bicycle helmets benefit everyone, equally, in all situations, or that wearing a helmet should be a legal requirement. Ultimately, the choice is yours. If you're an ordinary, careful rider and you just happen to have an accident that you survive, a cycle helmet could reduce your risk of a serious head injury and save your life. That's why many cyclists conclude that wearing a helmet is a no-brainer, while not wearing one could leave you with no brain. But while scientists and doctors argue over whether helmet wearing is a good or a bad thing overall, the evidence is pretty clear that if you are involved in an accident, you're generally better off if you're wearing a helmet. As Diane C Thompson from the University of Washington and colleagues found in a 1999 review: "Wearing a helmet dramatically reduces the risk of head and facial injuries for bicyclists involved in a crash, even if it involves a motor vehicle."

General information from other sites

Patents are a great place to find detailed technical descriptions of how things work. Here are a few that cover modern bicycle helmets: