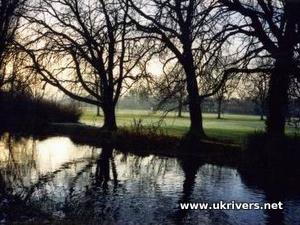 Why do rivers enthrall us? Maybe it's because they're teeming with life—everything from nibbling midges to flashing kingfishers and trout and salmon wiggling beneath the ripples. Perhaps it's because water is so central to our existence and so vital to life. Possibly it's to do with the tranquility of a river; in countryside or in cities, the sight of water has an instantly calming effect. All these things come to mind, instinctively or very consciously, whenever we think of rivers or spend time near them swimming, fishing, boating, or canoeing. Let's take a look at what makes rivers so amazing!

What is a river?

Water is constantly circulating between Earth's surface (the land and oceans that make up our planet) and the atmosphere up above in a never-ending conveyor belt called the water cycle.

Rivers are the main parts of the conveyor that carry water from the higher parts of Earth (the mountains and hills that we call uplands) to the lower parts (lakes and seas).

You can think of rivers as drains, if you like: channels with fairly well defined banks, carved through millennia, that can be thin and shallow or very deep and wide. Powered by gravity, rivers are always flowing downhill (even when they look absolutely flat, they're really flowing down a gentle incline). Unlike seas, which are salty, rivers are filled with freshwater to which the lives of many different creatures (insects, animals, and humans too) have become perfectly adapted. Far from the oceans, rivers bring the land to life. 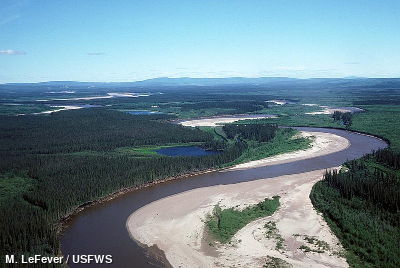 The path of a river

You might think a river is a dead thing, because it's not a living organism. But you can think of a river as a living thing in at least three important ways. First, it's full of living creatures like otters and fish: it may not be alive, but it's certainly full of life. Second, it's living in the sense that it's constantly adapting to Earth's changing climate, geology, ecology—and even the changes that humans bring. Third, it's living because it changes its character from the place in the uplands where it begins its life (known as its source) to the place where it ends its life (known as its outlet or mouth, where it flows into the sea). The path that a river takes in its journey over Earth's surface is a bit like the life a human leads between birth and death but, where a human's life is spread out in time, a river's spreads out in geographical space. 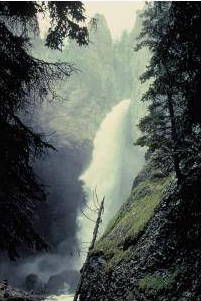 Photo: Tower Falls. A waterfall is a typical feature of the upper reaches of a river. Photo by Bruce Halstead courtesy of US Fish and Wildlife Service.

A river begins life high in the hills or mountains. In a cold region, a river may be created by melting snow or a glacier. In warmer places, rivers typically form when water drains from a whole series of upland slopes known as a basin. Water drains from each slope to form a small trickle called a rill. Rills from many slopes combine to form brooks, which join together to make creeks (small streams) and larger streams, before all these things eventually merge into a river. The brooks, streams, and creeks that form a river are called its tributaries. Flowing down from high hills and mountains, the upper part (or course) of a river is usually narrow, steep, and marked by sharp valleys and abrupt, zig-zag changes of direction. The steepness means the water flows quickly, often forming dramatic features such as white-water rapids and waterfalls (great for canoeists). Rapid flow means the water has high energy to cut through rocks, wearing away deposits in a process called erosion.

As rivers leave the hills and mountains where they're created, they take on the classic pattern of the mature rivers we see in the landscapes around us. They're wider, slower, less steep, and change course more gradually. The features they form are bigger and more substantial: wider lakes, wandering S-shaped bends called meanders, and deeper, broader cuts in the landscape called valleys. Sometimes two rivers will join together at a point called a confluence. 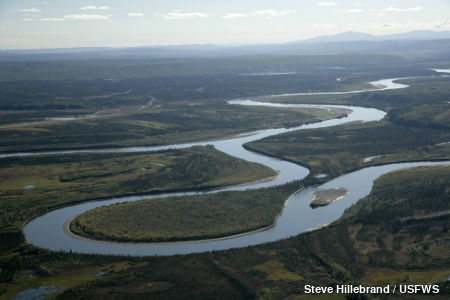 Photo: Meanders occur in the middle and lower reaches of a river. These meanders are at the confluence (joining point) of the rivers Alatna and Koyukuk near Allakaket. Photo by Steve Hillebrand courtesy of US Fish and Wildlife Service.

Sediment carved from the upper reaches of the river and carried downstream can build banks called levees that keep the water level higher than the landscape around it. When flows are high, water spills over the banks carrying mud and sediment with it and creating marshy floodplains. As rivers cross floodplains, they snake from side to side eroding the landscape in some places and building it up other places through a process called deposition. Rivers are often surrounded by lush grassland areas called meadows. 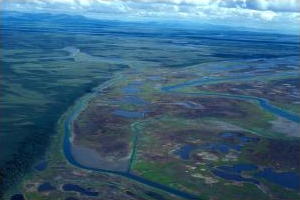 Photo: Deltas occur at the lowest part of a river's course. Or, to put it another way a delta is the last stage in a river's life before it meets the sea. Aerial view of the Noatak River Delta in Alaska. Photo courtesy of US Fish and Wildlife Service.

There are no strict boundaries between the upper, middle, and lower courses of a river, and many middle-course features (like meanders) are also found in the lowest reaches of a river. But the lower course of a river is less steep again than the middle course and the water runs even more slowly. Rivers finally reach the sea at estuaries (wide, deep, open river mouths) and triangular-shaped deltas (where a river deposits sediment at its mouth creating many narrower channels called distributaries instead of a single, wide mouth). 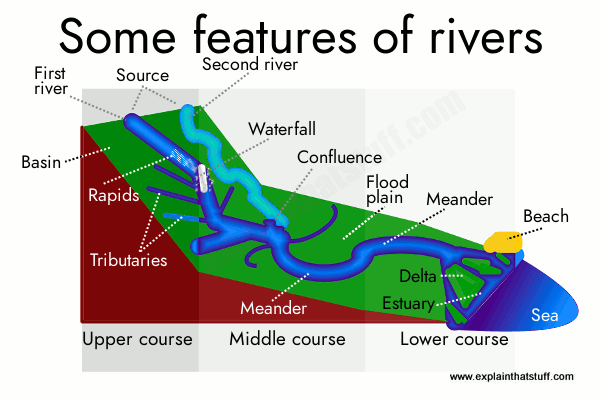 Think of a huge torrent of water flowing under the power of gravity, for thousands of years. Like the water from a pressure washer, it has enough energy to cut sediment from the hills of its upper reaches and carry it down to the middle and lower reaches. Rivers gradually slow down because the water has to overcome friction as it flows—friction as the moving water rubs against the banks and bottom of the river channel itself and friction as layers of water flow past one another. The rate at which a river flows is also affected by the climate and the seasons. Some smaller streams (known as winterbornes) dry up entirely in summer. Humans also have a huge effect on river flows through abstraction (removing water for many different uses), from irrigation (watering crops in the countryside) to supplying factories and homes with the water they need.

Why do rivers matter to people? 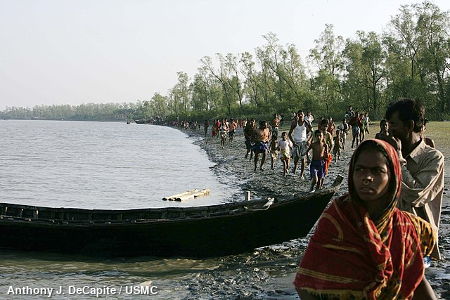 Photo: Villagers gather on the banks of a river in Bangladesh waiting for humanitarian aid. Photo by Anthony J. DeCapite courtesy of US Marine Corps and Wikimedia Commons.

Thousands of years ago, human settlements grew up around great rivers such as the Tigris and Euphrates in the Middle East—and this was how modern civilization began. Rivers remain, in a sense, the "open pipes" that supply many towns and cities with the water people need. Rivers have also been hugely important in helping people travel across Earth, especially before modern roads were constructed, both for exploration and trade. People have been harnessing the energy in rivers since ancient times and modern-day environmental problems such as global warming have led to renewed interest in such things as hydroelectric power (made by damming rivers and forcing them to flow at high-speed past turbines to generate electricity).

Rivers are incredibly important to people, but we've not always looked after them properly. Removing sand and gravel from river beds for building materials can damage them, for example, while pouring untreated sewage and other wastewater into rivers causes pollution, lowers water quality, and reduces how much life they can support. Thankfully, many people recognize just how important rivers are. Lots of people use them for recreation, from fishing and canoeing to walking their dogs along riverbanks. Many people have formed themselves into community groups to help keep their rivers clean and protect them from damaging industrial developments. Rivers give us life and help to look after us—and it's vitally important that we return the favor!

Chart: The world's ten longest river systems (some are made up of two or three rivers "joined" together). At over 6650km (4100 miles), the Nile is long enough to stretch the width of the United States from New York City to Los Angeles (roughly 4500km or 2800 miles)... and halfway back again! Data from the Wikipedia article List of rivers by length.

Examples of rivers in crisis