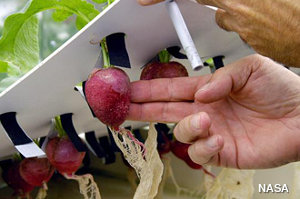 Look, no soil! We're so used to plants growing in fields and gardens that we find anything else completely extraordinary. But it's true. Not only will plants grow without soil, they often grow a lot better with their roots in water or very moist air instead. Growing plants without soil is known as hydroponics. It might sound weird, but many of the foods we eat—including tomatoes on the vine—are already grown hydroponically. Let's take a closer look at hydroponics and find out how it works!

Plants grow through a process called photosynthesis, in which they use sunlight and a chemical inside their leaves called chlorophyll to convert carbon dioxide (a gas in the air) and water into glucose (a type of sugar) and oxygen. Write that out chemically and you get this equation:

There's no mention of "soil" anywhere in there—and that's all the proof you need that plants can grow without it. What they do need is water and nutrients, both easily obtained from soil. But if they can get these things somewhere else—say, by standing with their roots in a nutrient-rich solution—they can do without soil altogether. That's the basic principle behind hydroponics. In theory, the word "hydroponics" means growing plants in water (from two Greek words meaning "water" and "toil"), but because you can grow plants without actually standing them in water, most people define the word to mean growing plants without using soil.

Photo: Onions, lettuces, and radishes all grow well with hydroponics. The white surface of hydroponic containers like these helps to reflect light evenly onto the plant leaves, improving growth. Photo by courtesy of NASA Kennedy Space Center (NASA-KSC). 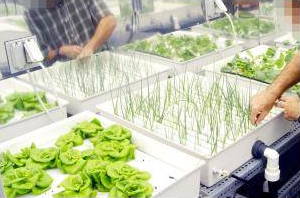 Although the benefits of hydroponics have sometimes been questioned, there seem to be many advantages in growing without soil. Some hydroponic growers have found they get yields many times greater when they switch from conventional methods. Because hydroponically grown plants dip their roots directly into nutrient-rich solutions, they get what they need much more easily than plants growing in soil, so they need much smaller root systems and can divert more energy into leaf and stem growth. With smaller roots, you can grow more plants in the same area and get more yield from the same amount of ground (which is particularly good news if you're growing in a limited area like a greenhouse or on a balcony or window-ledge inside). Hydroponic plants also grow faster. Many pests are carried in soil, so doing without it generally gives you a more hygienic growing system with fewer problems of disease. Since hydroponics is ideal for indoor growing, you can use it to grow plants all year round. Automated systems controlled by timers and computers make the whole thing a breeze. 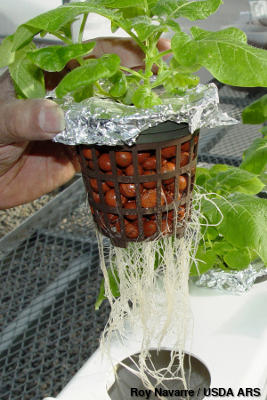 It's not all good news; inevitably there are a few drawbacks. One is the cost of all the equipment you need—containers, pumps, lights, nutrients, and so on. Another drawback is the ponic part of hydroponics: there's a certain amount of toil involved. With conventional growing, you can sometimes be quite cavalier about how you treat plants and, if weather and other conditions are on your side, your plants will still thrive. But hydroponics is more scientific and the plants are much more under your control. You need to check them constantly to make sure they're growing in exactly the conditions they need (though automated systems, such as lighting timers, make things quite a bit easier). Another difference (arguably less of a drawback) is that, because hydroponic plants have much smaller root systems, they can't always support themselves very well. Heavy fruiting plants may need quite elaborate forms of support. 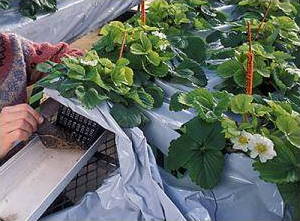 How does hydroponics work?

There are various different ways of growing things hydroponically. In one popular method, you stand your plants in a plastic trough and let a nutrient solution trickle past their roots (with the help of gravity and a pump). That's called the nutrient-film technique: the nutrient is like a kind of liquid conveyor belt—it's constantly sliding past the roots delivering to them the goodness they need. Alternatively, you can grow plants with their roots supported by a nutrient-enriched medium such as rockwool, sand, or vermiculite, which acts as a sterile substitute for soil. 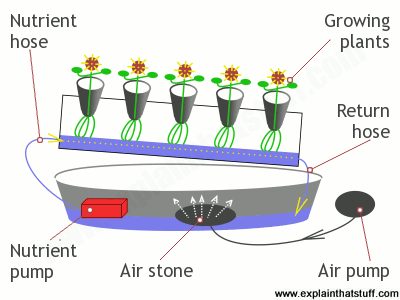 Artwork: In the nutrient-film technique, nutrient constantly drips past the roots of the plants, which grow out from an inclined tray. The nutrient is pumped back up to the tray and a second pump adds oxygen through an air stone (a piece of porous rock that lets air bubble through it—just like in a fish tank).

Another method is called aeroponics and it's typified by a popular product called the AeroGarden (see box below). Although the name suggests you're growing plants in air, the roots are actually suspended inside a container full of extremely humid air. Effectively, the roots grow in a nutrient-rich aerosol a bit like a cloud packed full of minerals.

In theory, you can grow any plant hydroponically but—as is always the case with gardening—some things inevitably do better than others. Fruit crops such as tomatoes and strawberries, and lettuces and herbs, are among plants that do particularly well. 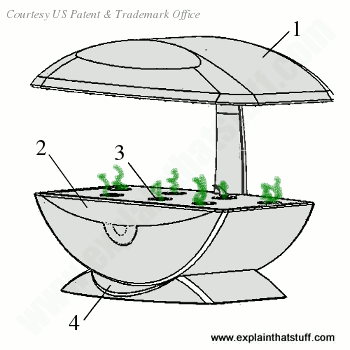 Artwork: A typical AeroGarden grower and its key parts: 1 = Artificial light hood; 2 = Door for adding liquid and inspecting roots (with a liquid gauge beneath); 3 = Seven separate openings for plants; 4 = Electronic display and control panel (including warning lights telling you when to add water and nutrients). Artwork from US Patent 20060272210: Smart garden devices and methods for growing plants, courtesy of US Patent and Trademark Office.

Want to have a go at hydroponics but don't know where to start? This revolutionary AeroGarden® (made by AeroGrow) might be worth a look. It's an easy-to-use, highly automated hydroponicum (hydroponic growing box) that's small enough to stand in your kitchen (it's just 40 cm x 25 cm x 38 cm; 16in x 10 in by 15 in), in which you grow plants with their roots dangling down into a sealed container filled with 100 percent humid, nutrient rich, highly oxygenated air. Think of a hot and steamy greenhouse and you're on the right lines: the makers describe it as a "near-perfect rainforest growing environment."

Unlike traditional hydroponic systems, which require quite a lot of careful observation and tending to keep the nutrient levels just right, the AeroGarden's microchip controller practically does everything for you. It automatically regulates light, nutrients, and water according to what you're growing; the built-in, energy-efficient daylight bulb (shining down from the black upper casing) turns on and off as necessary. Everything is amazingly easy. You simply buy ready-made seed pods and nutrient tablets that release their goodness slowly... and off you go. Hydroponics made simple!

There's a general description of how it all works in AeroGrow's 2006 patent, Smart garden devices and methods for growing plants by W. Michael Bissonnette et al, and you can find out a lot more on the company's website if you're interested.

AeroGarden is a trademark of AeroGrow International, Inc.