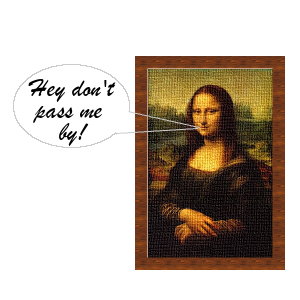 You're about to walk past the Mona Lisa in the Louvre art gallery without even noticing but, just as you pass by, the woman in the picture calls out and starts telling you her story—who she is, how she came to be painted, and how she's lived her cramped life inside this simple wooden frame for almost 500 years. Suitably informed, you walk on through the gallery and the same thing happens with the next painting... and the next... and the next!

Sounds like a joke? It's likely to happen before much longer as museums, galleries, and exhibitions start taking advantage of a clever new type of loudspeaker. Instead of pumping air out randomly over a wide area, directional speakers can target sound like a stage spotlight to a precise place where only certain people can hear it. Directional loudspeakers have all kinds of uses, from high-tech megaphones on naval warships to billboards that catch your ear as well as your eye. Let's take a closer look at how they work!

Photo: Thanks to directional speakers, museum exhibits could soon be talking to you—and only you!.

What is a directional loudspeaker? 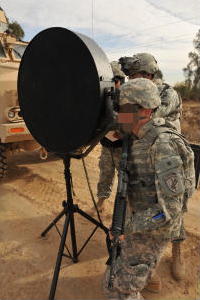 A conventional loudspeaker is designed to spread sound over a fairly wide area: it has a paper or plastic cone that moves back and forth, pumping sound in a wide arc in front of it. The more energy you feed into a speaker (in the form of electric current), the more energy it can pump out as sound, the further the sound waves can travel, and the louder they seem to be. Giant speakers used at rock festivals produce so much energy that they can be heard over a huge area, whether you want to hear them or not.

Most of the time this is exactly how we want speakers to behave, but there are times when it would be helpful if they could work more selectively. Suppose you're the captain of a giant, fast-moving warship and you see a tiny fishing boat moored just up ahead and locked firmly in your path. If it doesn't respond to radio contact, you have a problem. You could use a megaphone to try to call out, but that's just a basic loudspeaker, really, and the sound it makes will probably not reach far enough. Wouldn't it be neat if you could send out a very focused "shout," in a tight beam of sound, that would travel all the way to the fishing boat to catch its attention, even from a huge distance away? This is essentially what a directional loudspeaker does: it's a kind of "sound flashlight" that can "shine" sound energy into a precise spot, even from some distance away. 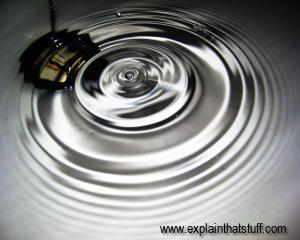 Photo: Energy ripples out in waves across the surface of water. The further the waves travel, the more their energy dissipates, because it's spread further, over a widening area.

You've seen ripples spreading out when you prod the surface of a still pond with your finger? That happens because the waves of energy you're putting into the water travel outward in all directions. The further the waves travel, the bigger the area over which their energy spreads. Eventually, the waves have so little energy that they disappear completely. Exactly the same process happens with sound waves. Whether you shout with your voice or pump sound through a loudspeaker, the sound waves spread outward from the source and their energy is gradually dissipated. 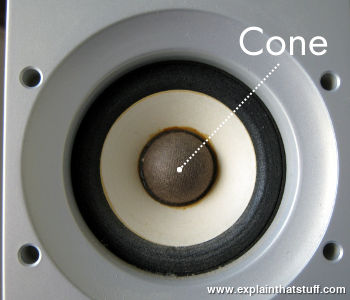 Directional speakers work in an entirely different way from conventional loudspeakers. The biggest difference is that they don't produce ordinary, audible sound waves with a single, moving electromagnetic coil and cone. Instead, they generate ultrasound (high-frequency sound) waves that are too high pitched for our ears to hear using an array of electrical devices called piezoelectric transducers. These are simply crystals, such as quartz, that vibrate back and forth tens of thousands of times a second when you feed electric currents through them, producing very high frequencies of sound. Ultrasound is used because its higher-frequency waves have a correspondingly shorter wavelength and spread out less as they travel, which means they stay together in a beam for longer than ordinary sound would. Also, having an array of many, small transducers makes sound disperse less than it would do from a single, large transducer (for reasons briefly explained in this article on directional sound).

Effectively, then, the ultrasound travels out from a directional speaker in a narrowly focused column, like a flashlight beam. But when it hits something, it turns back into ordinary sound you can hear. So, in the case of our talking Mona Lisa, there's a concealed directional loudspeaker next to the picture. It fires out ultrasound that travels out from the front of the picture and gradually dissipates into the room. If (and only if) someone walks into the beam, the ultrasound waves collide, turn back into normal sound, and Mona Lisa's voice is magically heard.

One of the biggest advantages of directional loudspeakers is how far they can make sound travel. In theory, sound pumping out from a conventional speaker follows what's called the inverse-square law, so doubling the distance from the speaker reduces the intensity by much more than half. But a directional speaker sends its sound in a much more tightly focused column, with far less energy dissipation. In practice, that means it can travel something 20 times further than sound from a conventional speaker. 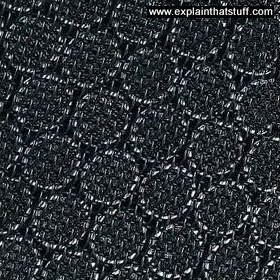 Photo: A parametric, directional speaker has an array of many ultrasonic transducers. This is a closeup of a Sennheiser Audiobeam, which has 152 small transducers.

If that's as much as you want to know, fine. But the more technically minded among you will recognize this explanation as a bit of a gloss, to say the least. You might be wondering how the ultrasound turns back into audible sound: if you can't hear Mona Lisa when you stand to one side, why can you suddenly hear her if you walk through the sound beam?

The speaker array actually produces a modulated wave made of two separate ultrasound waves. One of them is a steady, reference tone of a constant 200,000 hertz (Hz) frequency (the carrier wave) and the other is the signal that fluctuates between 200,200 Hz and 220,000Hz (the modulating wave). Although they're combined, it's easiest to think of them as two separate waves traveling out in parallel straight lines through a column of air without overlapping. If they meet an obstruction (such as your curious head), they suddenly slow down and mix together so they interfere constructively (by adding together) and destructively (by subtracting from one another). By the principle of wave superposition, two ultrasound waves of those frequencies can subtract from one another to produce a third wave with a much lower frequency in the range 200–20,000 Hz—and that's in the frequency range that your ears hear. An electronic circuit attached to the piezoelectric transducers constantly alters the frequency of the two waves so they produce the correct lower, audible frequency when they collide and "demodulate." (It also encodes the signal in a unique way that ensures there's less noise and distortion when it separates out in the listener's ear.) The process by which the two ultrasound waves mix together is technically called parametric interaction, which is why speakers that work this way are sometimes called parametric loudspeakers.

Summary of how directional speakers work

What are directional speakers used for? 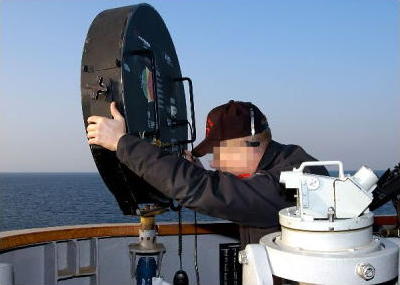 Photo: A Long Range Acoustic Device (LRAD®) is being used here to send a warning from the USS Blue Ridge to a small, incoming craft during an attack drill. Note how you have to swivel the LRAD® and point it in the direction you want the sound to go, just like a flashlight. Photo by Tucker M. Yates courtesy of US Navy and Wikimedia Commons.

The possibilities are truly limitless. Imagine advertisements or in-store displays that talk only to you as you walk past. Or hospital televisions that beam their sound only to the patients in certain beds, leaving the others undisturbed. What about megaphones that police officers could use to address only one or two troublemakers in a rioting crowd? Or speakers on a concert stage that performers could use to send private messages to certain people in the audience! How about hands-free speaker phones that only a few people, sitting nearby, could hear? Great for noisy offices!

The U.S. military has been using directional speakers since 2004. The system they use is called LRAD® (long-range acoustic device) and consists of giant flat loudspeakers mounted on the side of ships so they can send loud audio warnings to vessels at a potential range of over 500m (a third of a mile). It's particularly useful on loud and noisy aircraft carriers where any conventional loudspeaker would be drowned out by the background noise from jet planes and helicopters. Some police departments have been using LRAD as a means of crowd control for over a decade, though the practice is controversial. Following one protest in New York City in 2014, lawyers complained that LRAD devices "are designed to perform crowd control and other functions—to modify behavior, and force compliance, by hurting people," according to The New York Times. Protesters reached a settlement with the NYPD to limit use of LRADs in 2021. 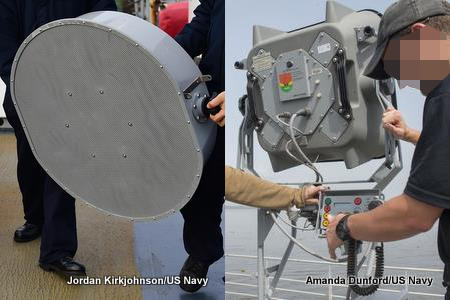 Photo: Front and back views of two different LRAD® models. Left: You can get a sense of how big and bulky this LRAD is: it's being carried here by two men. Photo by Jordan Kirkjohnson courtesy of US Navy. Right: Here's the back of a lightweight LRAD 500X (Extreme) with the control panel and microphone unit just underneath. This model is 64cm (24in) square and can beam sounds up to 2km (1.2 miles) away. Photo by Amanda Dunford courtesy of US Navy.

Similar principles have also been used in some types of hearing aids. Ultrasonic sound is used to ferry inaudible, high-fidelty sound directly into someone's ear canal—and, in this case, the demodulation happens inside their inner ear, producing sound only they can hear.

The kind of directional-speaker technology we're talking about in this article was originally developed by naval scientists who were using parametric arrays with sonar (underwater navigation) systems. One of the first people to perfect the technology for use with audible sound was US inventor Woody Norris; his system, called HyperSonic Sound (HSS)®, is marketed by Genasys (formerly called LRAD Corporation and American Technology Corporation, ATC), which makes the LRAD® and a number of related products. The Holosonics® Audio Spotlight® uses broadly similar ultrasonic technology developed by former MIT student Dr Joseph Pompei.

If you want a more detailed technical explanation of how parametric, directional speakers work, these patents are the best place to start.