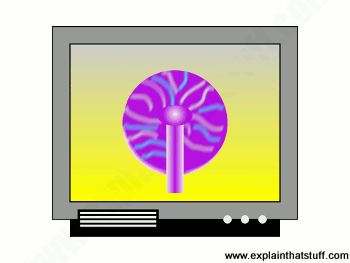 A box that makes pictures from a soup of hot gas? Whatever next? Cars that can fly? Men on Mars? It may sound like something straight out of Flash Gordon, but plasma television was far from science fiction. It was a brilliant example of how cutting-edge science can be applied to everyday problems to make our lives better and more fun—and the science is still interesting even if the technology is obsolete. Let's take a closer look at how it worked!

Artwork: A television powered by plasma. You often can't tell from a quick look whether a flatscreen TV is LCD, plasma, or even OLED. It used to be the case that if you wanted a very large TV, you'd have to buy a plasma screen, but LCD and OLED screens are now available in very large sizes and much more efficient to boot.

What is plasma anyway?

In schools they teach us that all substances come in three basic flavors or states of matter: solid, liquid, and gas. But they're wrong! There's a fourth flavor called plasma (and a fifth one called a Bose-Einstein condensate too, that we won't get into here, but which earned three scientists the 2001 Nobel Prize in Physics). What exactly is a plasma and how does it relate to solids, liquids, and gases?

Suppose you have a lump of freezing cold ice (a solid). Heat it up a bit and you'll get a liquid (water). Heat it up a bit more and, pretty soon, you'll have a gas (steam). The more heat you supply, the more energy you inject. The more energetically the molecules (or atoms) have, the further apart they can push and the more they move about. In a solid like water, the molecules are bound tightly together; in liquid water, the molecules are free to move past one another (that's why water can pour and flow); in steam (gaseous water), the molecules are completely free of one another and have so much energy that they spread out to fill all the space available. 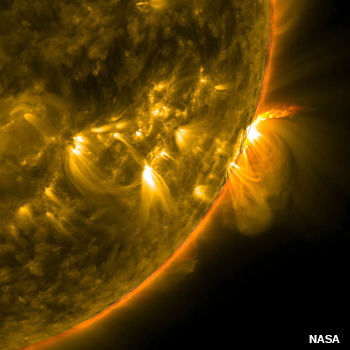 Photo: The Sun mounts an impressive display of plasma in magnetically intense areas of its surface known as active loops. The eruptions of plasma you can see here are gigantic—many times the size of Earth! Photo courtesy of NASA/SDO.

But what happens if you don't stop there? What if you keep on heating a gas? The molecules and atoms inside it break apart, releasing some of their electrons so they move freely in and around it. When atoms disintegrate like this, they form positively charged particles called ions. The mixture of positively charged ions and negatively charged electrons in a plasma turns it into a kind of hot soup that will conduct electricity very easily. That's what we mean by a plasma. It's a special type of gas in which some of the atoms have become ions (an ionized gas, in other words). 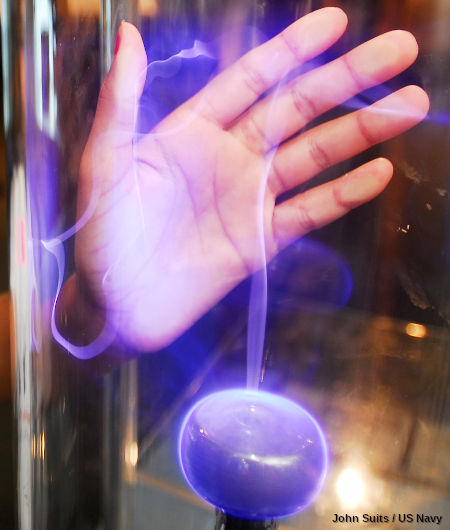 Photo: Playing with plasma. Plasmas are made when some of the electrons in a gas break free, leaving behind a positively charged nucleus called an ion. The negatively charged electrons and positively charged ions make it possible for the gas to conduct electricity. This glass sphere contains plasma: a hot, ionized gas produced with an electric current. When you put your hands on the glass, they attract free electrons so the plasma seems to move toward you. Photo by John Suits courtesy of US Navy and Wikimedia Commons.

How a plasma TV set makes its picture

If you've read our articles on energy-saving fluorescent lamps (also known as CFLs) and neon lamps (the lamps that make brightly colored displays in our streets), you'll know how they make light by buzzing electricity through a gas. Imagine if you built a TV screen out of millions of microscopically tiny CFLs or neon lamps, each of which could be switched on or off very quickly, as necessary, by an electronic circuit, to control all the separate pixels (lit-up, colored squares) on the screen. That's pretty much how a plasma TV works and it's very different to other kinds of television technology: in a conventional (cathode-ray) television, the picture is built up by scanning an electron beam back and forth over a screen treated with chemicals called phosphors; in an LCD TV (liquid-crystal display television), polarizing crystals make light rays bend to switch the pixels on and off.

The pixel cells in a plasma TV have things in common with both neon lamps and CFLs. Like a neon lamp, each cell is filled with tiny amounts of neon or xenon gas. Like a CFL, each cell is coated inside with phosphor chemicals. In a CFL, the phosphor is the chalky white coating on the inside of the glass tube and it works like a filter. When electricity flows into the tube, gas atoms crash about inside it and generate invisible ultraviolet light. The white phosphor coating turns this invisible light into visible white light. In a plasma TV, the cells are a bit like tiny CFLs only coated with phosphors that are red, blue, or green. Their job is to take the invisible ultraviolet light produced by the neon or xenon gas in the cell and turn it into red, blue, or green light we can actually see. 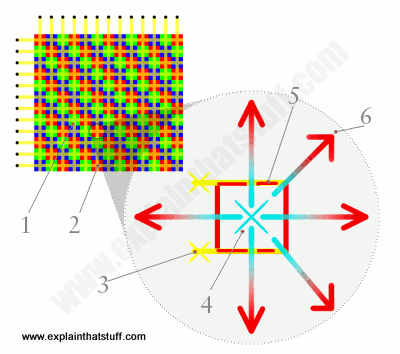 The first practical plasma screen was developed in the 1960s by Donald Bitzer, Hiram Slottow, and Robert Willson of the University of Illinois, as part of an educational computer system called PLATO. This is one of Bitzer's own illustrations of his invention from his original patent, which was filed in 1966 and eventually granted in 1971. Like my illustration above, you can see that the screen consists of multiple, gas-filled display "minicells" (the orange blobs in the central blue section). In front and behind this are two sets of electrodes, one running horizontally and the other vertically. Each gas minicell ("blob") in the screen can be fired by energizing the appropriate pair of electrodes either side. Since each minicell can only be either on or off, this screen can display monochrome pictures but not color ones. 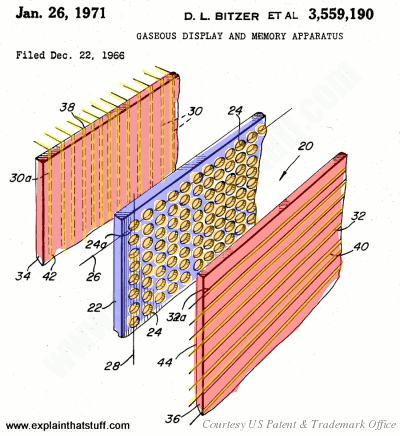 What's the difference between plasma and LCD TV?

Plasma and LCD TVs look very similar but, as we've just seen, work in totally different ways. The main difference is that the cells that make up the pixels in a plasma TV could switch on and off thousands of times faster than the pixels in an LCD screen, so you got clearer pictures with less blur, especially for moving images during action movies or sports games. (The latest LCD screens switch on and off more quickly than older ones, but it's generally true that plasma screens were faster.) Plasma TVs were also typically brighter and had higher contrast, which is important if you watch a lot of TV in the daylight. You could view plasma screens from a wider angle without seeing distortion of colors (like you get on an LCD computer screen), so they were often better for larger audiences (projection TV is another option for showing pictures to a roomful of people).

But there were drawbacks with plasma too. They were more power hungry than LCDs, for one thing. Here's a very rough comparison of the four main TV technologies to give you an idea. You can see that plasma really stands out from the pack:

Plasma screens were also heavier and more fragile, so you had to be very careful when you transported them. Plasma TVs also had problems with "burn in" (where images that were displayed for too long permanently damaged the screen) and they tended to "burn out" (stop working through too much use) more quickly than LCDs, though most people were likely to replace a TV for something newer before this happened.

The market for plasma TVs peaked around 2010; they essentially became obsolete in 2014 when first Panasonic and then Samsung (which, between them, made about three quarters of all plasma sets) abandoned the technology and better-funded, more-innovative rival technologies (LCDs and OLEDs (organic LEDs)) took over.

For deeper technical detail, try these: