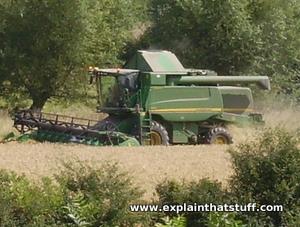 In 1800, something like 90 percent of the entire US population was employed working the land; fast-forward 200 years and you'll find only 2 percent of people are now working this way. What caused that amazing change in society? One important factor was the development of huge, automated machines such as combine harvesters that made each agricultural worker vastly more productive. Let's take a closer look at how they work!

Photo: A typical combine harvester, or "combine," made by John Deere; other makes include Case IH, Gleaner, New Holland and Claas. You can see how wide the header (front cutting mechanism) is compared to the main body of the machine. The biggest combines have headers about 12m (40 ft) wide! 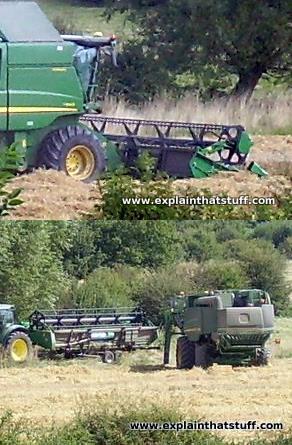 Photo: Left: Top: The enormously wide header at the front of a combine makes it impossible to drive down a narrow country lane, so how do you move it from field to field? Bottom: Fortunately, the header can be removed and towed on a special trailer, sideways behind a tractor. It's a simple job that takes jus a few minutes.

What does harvesting involve? 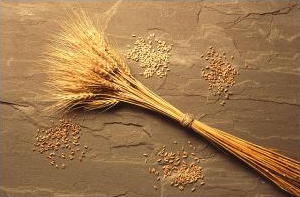 Photo: Wheat is one of the world's most important cereal crops. All we eat are the little grains at the top of each stalk (shown in the small piles alongside). Photo by Scott Bauer courtesy of US Department of Agriculture/Agricultural Research Service (USDA/ARS).

The crops we grow in our fields, such as wheat, barley, and rye, are only partly edible. We can use the seeds at the top of each plant (known as the grain) to make products like bread and cereal, but the dry coatings of the seeds (the chaff) are inedible and have to be discarded, along with their stalks.

Before modern-day machines were developed, agricultural workers had to harvest crops by carrying out a series of laborious operations one after another. First they had to cut down the plants with a long-handled cutting tool such as a scythe. Next, they had to separate the edible grain from the inedible chaff by beating the cut stalks—an operation known as threshing. Finally, they had to clean any remaining debris away from the seeds to make them suitable for use in a mill. All this took a lot of time and a lot of people.

Thankfully, modern combine harvesters do the whole job automatically: you simply drive them through a field of crops and they cut, thresh, and clean the grains all by themselves using rotating blades, wheels, sieves, and elevators. The grain collects in a tank inside the combine harvester (which is periodically emptied into carts pulled by tractors that drive alongside), while the chaff and the stalks spurt from a big exit pipe at the back and fall back down onto the field.

Photo: Combines have interchangeable headers so they can harvest all kinds of crops. This John Deere is fitted with a corn header, a special type of header with large, sturdy prongs for harvesting corn cobs. Left: Looking from the front; Right: looking down from the cab toward the incoming corn crops. Photos by Warren Gretz courtesy of US Department of Energy/National Renewable Energy Laboratory (DOE/NREL).

Inside a combine harvester

There's an awful lot going on inside a combine harvester—gears, blades, augers (screws that move cut crops), conveyors, belts, levers, and wheels—so I've vastly simplified everything to make it easier to follow. Roughly speaking, here's how a combine harvester works: 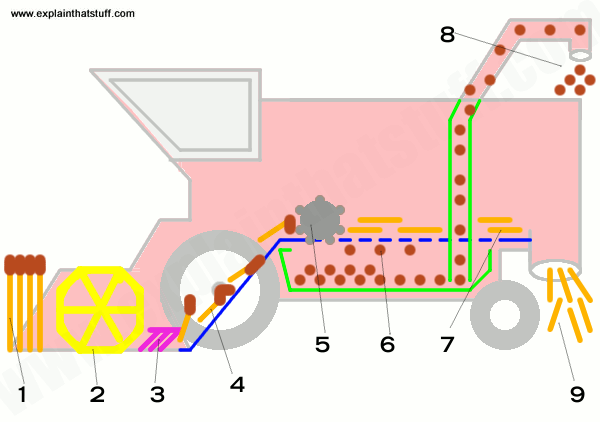 Photo: Unloading the grain tank of a combine harvester into a trailer pulled by a tractor driven alongside. The combine's header (cutting blade) has been raised right up so the driver can circle around the parked trailer and fill it up evenly. Look closely at the header and you'll see both the reel (black) and the cutter bar (green) underneath it.

The cutaway diagram below is from a John Deere harvester patent (US Patent #4,450,671: Combine harvester with modified feeder house), courtesy of the US Patent and Trademark Office, and labels about 130 different bits! 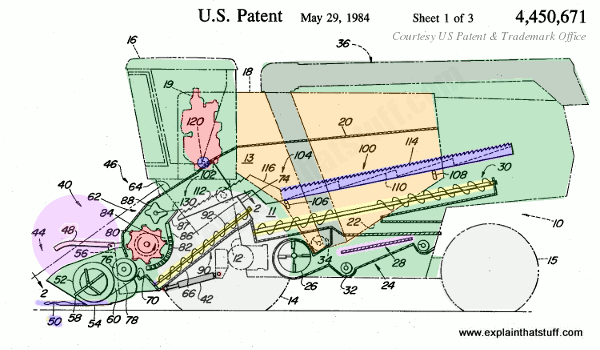 You'll be relieved to hear that I'm not going to go through all of them (you can look at the patent itself if you really want that much detail), but I have colored a few of the parts we've already looked at so you can see where they fit into a real machine. From left to right, look out for: 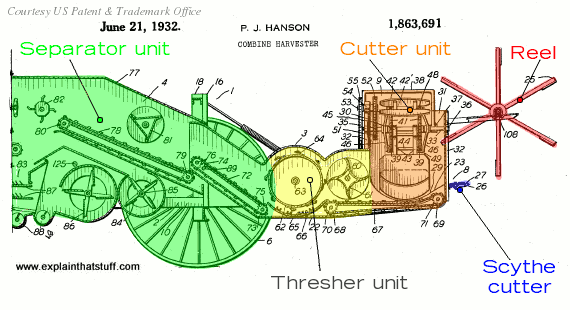 Not exactly! Here's a drawing of a Gleaner harvester from the 1930s, which I've colored and simplified into four basic parts:

Artwork: A Gleaner harvester designed by Perren J. Hanson and patented on June 21, 1932. You can read more detail about how it works in US Patent #1,863,691: Combine harvester (via Google Patents). Artwork courtesy of US Patent and Trademark Office.

If you're looking for a really detailed description of how a combine works, patents are a good place to begin. Here are a couple you might find useful: