Want to cook a dinner in five minutes or make an airplane safer to fly in bad weather? You'll be needing some microwaves, then. Those are the invisible, super-energetic, short-wavelength radio waves that travel at the speed of light, doing the important stuff in microwave ovens and radar-navigation equipment. Making microwaves is easy if you have the right equipment—a handy gadget called a magnetron. What is it and how does it work? Let's take a closer look!

Photo: The CV64 cavity magnetron, developed in Birmingham in 1942, was small enough to fit inside an airplane. Devices like this made it possible for planes to use radar defenses for the first time. An exhibit at Think Tank (the science museum in Birmingham, England). Sorry about the slightly poor quality of the image: the exhibit is inside a glass case and hard to photograph.

How does a magnetron work? 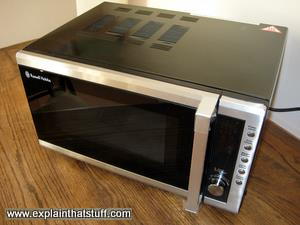 Photo: There's a magnetron tucked inside your microwave oven, usually just behind the control and instrument panel on the right. If you open the door, you can sometimes get a glimpse of the magnetron and its cooling fins through the perforated metal cage that separates it from the main cooking compartment.

A magnetron has quite a lot in common with a cathode-ray (electron) tube, the sealed glass bulb that makes the picture in an old-style television set. The tube is the heart of a TV: it makes the picture you can see by firing beams of electrons at a screen covered in chemicals called phosphors so they glow and give off dots of light. You can read all about that in our main article on television, but here (briefly) is what's happening. Inside the TV, there's a negatively charged electrical terminal called a cathode that's heated to a high temperature so electrons "boil" off it. They accelerate down the glass tube, attracted by a positively charged terminal or anode and reach such high speeds that they race past and crash into the phosphor screen at the tube's end. But a magnetron doesn't have the same purpose in life as a TV. Instead of making a picture, it's designed to generate microwaves—and it does that a little bit like a flute. A flute is an open pipe filled with air. Blow across the top in just the right way and you make it vibrate at a specific musical pitch (called its resonant frequency), generating a sound you can hear that corresponds directly to the length of the pipe. 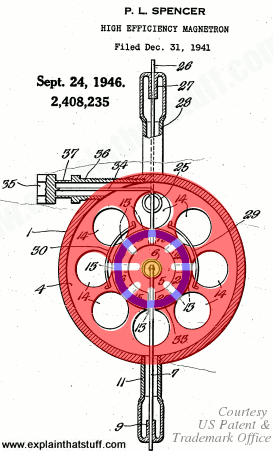 Artwork: Right: One of the drawings of the high-energy magnetron developed in the 1940s by Percy Spencer, who went on to perfect the microwave oven while working at Raytheon. (I've colored it in to match my own artwork below.) You can see a bigger version of this drawing and read the full technical details via Google Patents. Artwork courtesy of US Patent and Trademark Office.

A magnetron's job is to generate fairly short radio waves. If you could see them, you could easily measure them with a school ruler. They're usually no shorter than about 1mm (0.04 in; the shortest division on a metric ruler) and no longer than about 30cm (12in; the length of a typical school ruler). The magnetron does its stuff by resonating like a flute when you pump electrical energy into it. But, unlike a flute, it produces electromagnetic waves instead of sound waves so you can't hear the resonant energy its making. (You can't see that energy either, because your eyes aren't sensitive to short-wavelength, microwave radiation).

Photo: Typical microwaves range from the smallest (1mm) division on a school ruler up to the length of the ruler itself (30cm).

How does a magnetron make microwaves?

How does a magnetron resonate? It works a bit like a TV set:

In reality, it's all a bit more complicated than that—of course. But think of a TV set and a flute sort of merged together to produce microwaves instead of flute sounds or TV pictures and you'll get the basic idea!

A brief history of magnetrons

History and development of magnetrons 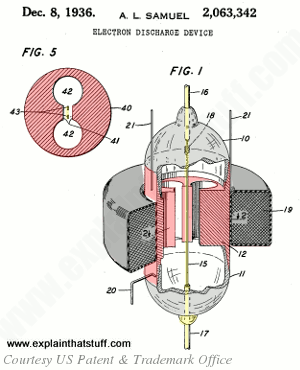 Artwork: Illustrations of Arthur Samuel's original cavity magnetron from his US Patent #2,063,342: Electron discharge device, courtesy of US Patent and Trademark Office. As in the artworks above, the anode is colored red, the cathode yellow, and the coil surrounding the glass discharge tube is dark gray.

If you want to read detailed technical descriptions of how magnetrons are designed and how they work, patents are an excellent place to start. They're not always that easy to understand, but the descriptions are extremely detailed and there are generally very clear labeled diagrams. Here are a few to start you off; you'll find lots more if you search at the USPTO (or Google Patents) using the keyword "magnetron":