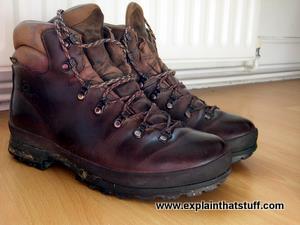 GORE-TEX is an amazing breathable, waterproof textile found in high-performance clothes such as walking/hiking boots and mountain coats. It's not the only material that's used in this way, but it's certainly the best known. Unlike ordinary synthetic textiles like nylon, waterproof-breathable textiles stop rain from getting in but let perspiration out. So they keep you dry on the outside and dry on the inside at the same time. Sounds remarkable, doesn't it? But how exactly does it work?

Photo: My fantastic GORE-TEX walking boots. They're leather on the outside, but the lining is made of completely waterproof GORE-TEX. You can jump in puddles all day long in a pair of these and your feet won't get wet.

What is GORE-TEX made of?

Suppose you're in the kitchen on a cold winter's day and you've got pans boiling away on the stove. Pretty soon, the windows are steaming up with condensation and the whole place feels like a sauna. But there's a storm outside and the rain is practically blowing sideways. What do you do? Well if you have sash windows (ones that open vertically at the top and bottom), you could open the top window just a fraction. Then the steam will drift out without the rain getting in. You'll let water out without letting rain in. Roughly speaking, GORE-TEX works the same way. It allows perspiration to escape one way through your clothes without letting rain come in the other way. 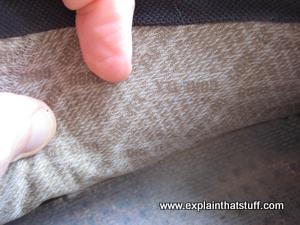 Is that some kind of magic trick? How can water flow through your clothes in only one direction? GORE-TEX isn't one simple material: it's actually a sandwich of three layers. There are two layers of nylon making up the "bread" and then a layer of microporous Teflon® (a brand name for polytetrafluoroethylene or PTFE) in between. You might know Teflon as the slippery coating on non-stick cookware. (Many people think it's a hi-tech remnant from the Apollo moon-landing program, but it was accidentally invented back in 1938 by a DuPont™ chemist called Roy Plunkett (1910–1994), who was trying to make a better refrigerator.) Teflon's slippery nature makes it great for waterproofing things. Some buildings, including the infamous Millennium Dome in London (now renamed The O2 Arena), are even made with gigantic Teflon roofs. Now no-one's interested in boiling an egg on top of a tent in east London; the Teflon's there to keep out the rain. 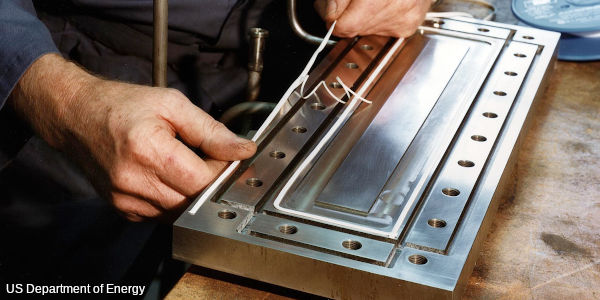 Photo: GORE-TEX has numerous uses apart from waterproof clothing. Here, a technician applies GORE-TEX seals to a gasket in a tank that forms part of a particle accelerator experiment used in nuclear research. Photo by US Department of Energy courtesy of Wikimedia Commons.

Why is GORE-TEX breathable?

The Teflon in GORE-TEX isn't quite waterproof because it has tiny holes (or pores) in it. That's why it's called microporous Teflon. The pores are less than one micrometer (one millionth of a meter) in diameter—less than one fiftieth the size of a human hair. And this helps to explain why water in one form can't pass through but water in a different form can.

When you sweat, your body produces steam, which is water in the form of a gas. As you probably know, the molecules in a gas are not really joined together. They can whizz freely all over the place, which is why a gas fills whatever it's contained in. Now a water molecule is about 700 times smaller than the pores in microporous GORE-TEX, so when you sweat, the steam can easily flow from your skin, drift through the GORE-TEX (by a process called diffusion), and out of your clothes. But water in rain is totally different from sweat. It's a liquid made up of droplets, each of which contains trillions of water molecules. A single water drop is about 20,000 times bigger than the holes in microporous GORE-TEX, so there's no way it's coming through. 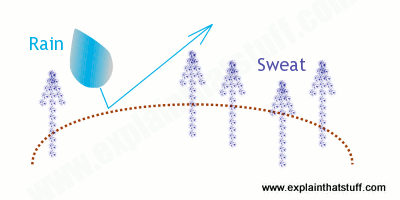 Artwork: How GORE-TEX can be both waterproof and breathable at the same time. Steam caused by perspiration passes out easily because the water molecules are smaller than the pores in the GORE-TEX liner; water droplets can't get in the other way because they're much bigger.

Two layers are better than one

“I figured that if we could ever unfold those (Teflon) molecules, get them to stretch out straight, we'd have a tremendous new kind of material.”

That's a very basic explanation—and if it's all you want to know, you can stop reading now. In practice, things are a little bit more sophisticated!

GORE-TEX clothes are generally made from three layers: a conventional outer shell fabric, plus two separate GORE-TEX layers with similar but quite different waterproof-breathable properties. On the inside, there's a relatively thin, relatively delicate inner membrane or film that's hydrophilic ("water-loving"), which readily allows water vapor to escape but doesn't allow liquid water in. The hydrophilic layer absorbs perspiration produced by your body and transports it, by diffusion, to the outside: unlike with many other textiles, the water doesn't move by wicking and capillary action (where the water soaks into the fabric and then channels through it, like water moving up a plant from the roots to the leaves), but because of the difference in water concentration between the inside and the outside. Next to the inner layer, there's a thicker outer layer made from a microporous plastic polymer, such as Teflon. This layer is hydrophobic ("water-hating"), which means it resists water from outside, even when it's impacting at high speed or pressure (as in heavy rain) or when the fabric is flexing back and forth (as you walk or run along). The hydrophobic layer doesn't soak up water coming in from the outside (droplets simply "bead" on its surface and stay there, without soaking in), but like the inner hydrophilic layer, it does allow perspiration to escape from the inside by diffusion.

Why have two layers to GORE-TEX instead of one? The outer layer provides protection and support for the inner layer, but it also provides thermal insulation: it reduces heat loss and helps to keep you warm. If it's not properly hydrophobic, the outer layer soaks up the rain, which cools the inner layer and makes your body cold. The two layers work together as a team, keeping water out, keeping heat in, and allowing perspiration to escape.

GORE-TEX is certainly the best known brand of high-performance, waterproof and breathable textile—but it's by no means the only one. If you're shopping around for outdoor clothing, bear in mind that there are plenty of rival textiles to consider; just because it's not branded "GORE-TEX," doesn't mean it's not going to be good. 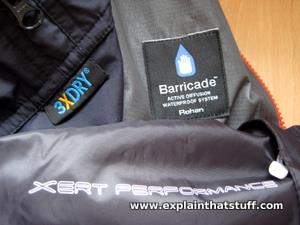 Photo: Dependable waterproof and breathable textiles are a big selling point for high-performance outdoor clothes. Here's a selection of jackets and waterproof pants I've just pulled from my own home. Like rival materials, Schoeller's quick-drying 3XDRY® has a hydrophobic outside and a hydrophilic inside, but they're both incorporated into a single layer, woven fabric. According to Schoeller, the fabric moves moisture so quickly that sweat doesn't have time to build up inside it. That's certainly been my own experience when I've worn the 3XDRY jacket shown here, but as a single layer of fabric it's not so good on colder days. Rohan uses its own waterproof and breathable textile called Barricade™.

Two very popular alternatives are eVent® and SympaTex®. eVent clothing works in a similar way to GORE-TEX: it has three layers of fabric, with a backing fabric on the inside, a wicking Teflon-type (PTFE) membrane in the middle to draw moisture away, and a water-repellent outside.

SympaTex is quite different. Instead of having micropores, like GORE-TEX and eVent, it uses what's called a copolymer, made of hydrophobic polyester and hydrophilic polyether. The polyester repels water from the outside; the polyether absorbs moisture from the inside and transports it out, away from your body. But there are no actual pores through which the water travels. 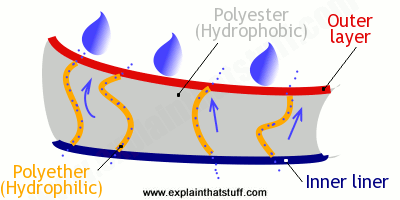 Artwork: How SympaTex works: Unlike in GORE-TEX, there are no micropores in SympaTex to carry moisture away from your body. Instead, hydrophilic polyether molecules in the SympaTex membrane effectively act like little "channels," carrying moisture from the inside to the outside. 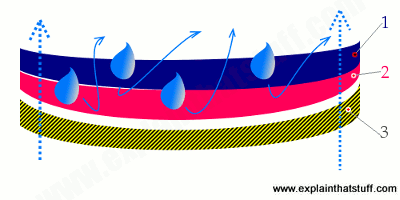 Artwork: Inside a multi-layer aerobic sports garment (such as a waterproof and breathable cycle sweater). 1) On the outside, there's a durable shell made of something like 85 percent polypropylene and 15 percent spandex (to give it body-hugging elasticity). 2) In the middle, there's a layer of waterproof and breathable SympaTex (or GORE-TEX). 3) On the inside, there's a tricot, warp-mesh lining to help moisture wick away from the body and increase comfort.

Quite a few clothing companies have developed their own breathable, waterproof textiles. Patagonia, for example, has H2No® (a two-layer polyester/polyurethane fabric with a water-repellant shell and a breathable membrane); Rohan has a porous-membrane fabric similar to GORE-TEX, known as Barricade™, and The North Face has a polyurethane coating called DryVent™ (formerly known as HyVent™). Proprietary fabrics obviously have advantages for clothing makers, who don't have to use and endorse someone else's product or pay their expensive licensing fees. But the plethora of different options can be very confusing for consumers: which one of these textiles will perform best for cycling, running, day-to-day trips to the office, and so on? Be sure to check out plenty of product reviews before you buy! 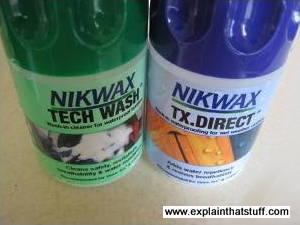 Photo: Keep it clean! One drawback of GORE-TEX is that you need to keep it clean to keep it waterproof—and clean it properly. Over time, as perspiration from your body escapes out through the material, it can cause a buildup of surfactants (detergent-like chemicals) that reduces the effectiveness of the waterproofing. In a similar way, the surfactants in ordinary detergents will clean GORE-TEX clothes but leave them considerably less waterproof. Always follow the manufacturer's cleaning instructions and be sure to use proper cleaning and waterproofing products designed specially for GORE-TEX and similar materials.

In October 1969, Dr Robert ("Bob") W. Gore (1937–2020) discovered how to turn PTFE into a microporous material called expanded polytetrafluoroethylene (ePTFE), which makes up the waterproof and breathable membrane used in GORE-TEX. He found if he heated PTFE and suddenly tugged it hard, he could stretch it into a strong but highly porous new form that could be used in many unexpected ways.

Gore was the son of Wilbert Lee ("Bill") Gore (1912–1986), a chemical engineer who worked at DuPont before starting his own firm, W.L. Gore & Associates, from his basement in 1957. Initially, Bill Gore's company used DuPont's Teflon to make electrically insulated ribbon cable (parallel connecting cables that link printed circuit boards together inside electronic devices). But it was Bob Gore's discovery of ePTFE that led to real success, spawning all kinds of profitable uses, from waterproof clothing and boots to guitar strings and medical implants, and turning W.L. Gore & Associates into a world-class chemical company with sales of over $2 billion a year. The first everday GORE-TEX product was a camping tent, which went on sale in 1976.

Teflon, Nafion, and DuPont are registered trademarks of E. I. du Pont de Nemours and Company.

SympaTex is a registered trademark of SympaTex Technologies GmbH.

3XDRY is a registered trademark of Schoeller Textil Ag.

DryVent and HyVent are registered trademarks of The North Face Apparel Corp.

Barricade is a trademark of Rohan.

H2No is a trademark of Patagonia, Inc.

eVent is a registered trademark of Performax Pro Limited.