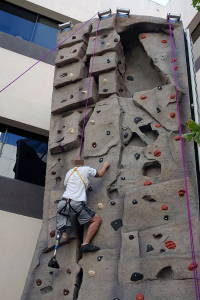 Have you ever met anyone who has an artificial limb? Chances are you have—without even knowing it. Modern prostheses (as artificial limbs are properly known) work so effectively and look so convincing that you wouldn't even know someone was wearing one. People with prosthetic legs can often climb stairs, walk, swim, and run as well as though they were using natural limbs, while prosthetic arms and hands have advanced to the point where they give individual control of all five fingers. You might think they're boring or mundane, but prosthetic limbs are among the world's truly great inventions: by boosting independence they boost optimism and both these things dramatically improve people's lives. Let's take a closer look at how these amazing devices work!

Photo: Anything you can do (part 1): Prosthetic limbs help to give people back their independence and challenge stereotypes of "disability." Photo by Greg Mitchell courtesy of US Navy.

What is a prosthesis? 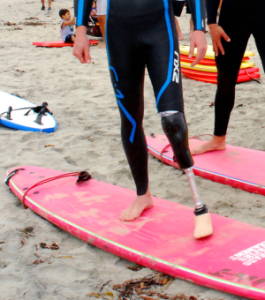 Photo: Anything you can do (part 2): Military amputees learn to surf at the Naval Medical Center San Diego. Photo by Jake Berenguer courtesy of US Navy.

A prosthesis (also called a prosthetic limb, artificial limb, or limb "replacement"—though natural limbs are irreplaceable) is an artificially made substitute for a limb lost through a congenital defect (present at birth), accident, illness, or wartime injury. A type of prosthesis called a cosmesis is designed to be purely cosmetic and has little or no function; artificial hands often fall into this category. Other prostheses are highly functional and have little or no cosmetic disguise; artificial legs, designed to be covered by pants (trousers), are sometimes little more than metal rods and wires.

In theory, any part of the body—from your ear or nose to your finger or toe—could be replaced by a prosthesis. In practice, there are four common types of prosthetic limb, which replace either a partial or complete loss of an arm or leg:

Photo: A typical transfemoral prosthesis. The white part at the top is the socket: it fits snugly around the patient's residual limb. Photo by Greg Mitchell courtesy of US Navy.

How does a prosthesis work?

A prosthesis consists of a number of different parts. There's the prosthetic limb itself, the socket (the connection or "interface" between the prosthetic limb and the patient's body), the attachment mechanism, and the control system. Let's briefly look at these in turn.

Photo: A pair of prosthetic racing "blades." Athletes who wear these use more conventional prostheses in everyday life. Photo by Sara Wood courtesy of US Army.

The construction of a prosthesis depends largely on the job it will have to do. While cosmetic hands are concerned purely with appearance, prosthetic legs are substitutes for a major structural part of someone's body and have to bear their entire weight. Typically, a prosthetic arm or leg is made from a strong and durable but lightweight material such as carbon fiber, covered with foam padding (for comfort) or flesh-colored plastic. The weight of prosthetic limbs is a very important factor. We don't notice how much our limbs weigh because they feel so natural and seem to move themselves. But if you consider that your two legs amount to 30–40 percent of your total body weight, and your two arms about 10 percent, you can see why prosthetic limbs need to be much lighter: you'd quickly get tired moving prosthetic limbs that weighed as much as natural ones. 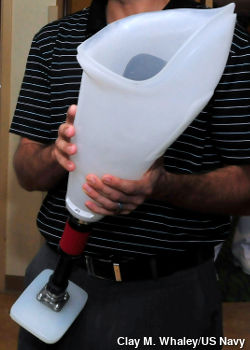 Photo: The socket is the interface between a patient's residual limb and their prosthesis. Without a good socket, even the best prosthesis is going to be uncomfortable and unusable. Photo by Clay M. Whaley courtesy of US Navy.

The comfort and effectiveness of a prosthesis is largely governed by how well it fits onto the remaining part of the patient's own limb, which is called their residual limb (or sometimes, informally, the "stump"—a term some people understandably find offensive, though it is, nevertheless, widely used in the medical world). The connecting part of a prosthesis is called the socket and it's carefully molded around a plaster cast taken from the residual limb. The fit of a socket has to be precise or the new limb may damage the residual one, causing discomfort or tissue damage and perhaps even making it impossible to wear the prosthesis for a time. A patient's residual limb is likely to change shape and size over months and years so new sockets will be needed from time to time. More precisely fitting sockets can now be made by scanning a patient's residual limb with lasers and cutting-edge techniques such as 3D printing are also now being used. However sockets are produced, it's important for them be custom-made and expertly fitted by an experienced prosthetist. 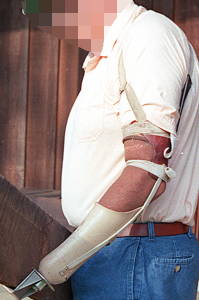 Photo: This simple transradial (below-the-elbow) prosthetic arm attaches with a socket, straps, and a shoulder harness. Note the relatively crude "hand," which has been specifically designed to help the man do his job. Photo by courtesy of NASA Marshall Space Flight Center (NASA-MSFC).

A well-fitting prosthesis is usually secured to a residual limb by what's called a suspension system (which might be an elastic sleeve, a suction socket, or old-fashioned straps and harnesses). A snug, secure fitting is vital for comfort—and ensures the limb can be properly controlled. Often the socket is itself a part of the attachment: for example, a prosthetic leg socket may consist of a large hollow plastic casing into which the residual limb is inserted. 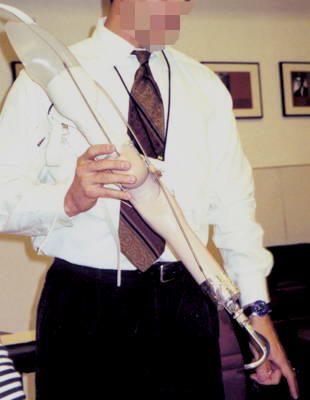 Photo: A prosthetist demonstrates a relatively simple prosthetic arm. Note the shoulder socket at the top (the light-colored plastic), the simple elbow joint, and the pincer-hand at the bottom controlled by cables running down from the shoulder. Photo by Greg Mitchell courtesy of US Navy.

Natural limbs are pulled back and forth by muscles stimulated by our brains; in much the same way, the simplest functional prostheses are operated by systems of cables that run through them, doing the job of the muscles. One common type of prosthetic hand is a pincer, sometimes worn inside a glove (for cosmetic reasons) that can be opened or closed by pulling cables attached to the opposite shoulder. Simple artificial legs work largely through gravity: the wearer learns to walk in them, through practice, by alternately swinging them into position and then balancing on them while they move their unimpaired leg in its turn. More sophisticated prostheses are electrically controlled and powered by rechargeable battery packs.

The most sophisticated (and expensive) prostheses are myoelectric. They use electrodes to sense muscular impulses in the residual limb (or elsewhere on the patient's body); electronic control systems detect those signals and amplify them to power electric motors that operate the prosthetic limb as though it were real. In other words, the patient thinks "I want to move my arm," their brain stimulates muscles in the residual arm, the electronic system commands the electric motors to move and the prosthetic limb shifts accordingly. 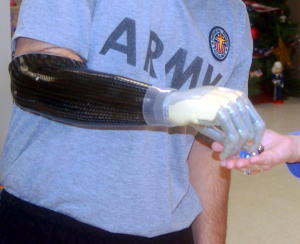 Photo: A much more sophisticated prosthetic arm and hand. This ultra-sophisticated i-limb™, made by Touch Bionics (now a part of Össur), has five working fingers that give good enough grip to pick up marbles. Photo by Charmain Z. Brackett courtesy of US Army.

Learning to live with a new limb

Technology is only part of the story, of course. Getting used to a brand new part of your body is a physical and psychological challenge involving a partnership between the patient and their prosthetist. This hugely important person works with you at every stage of the process, from choosing the best prosthesis for your needs; through the process of measuring, manufacture, and fitting; to helping you learn how to operate your new limb; and tackle new challenges such as taking up a sport or activity.