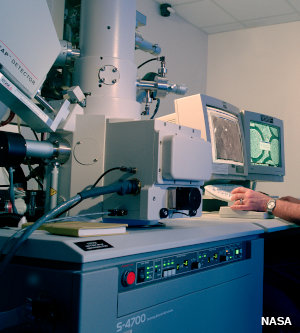 What's the smallest thing you've ever seen? Maybe a hair, a pinhead, or a spec of dust? If you swapped your eyes for a couple of the world's most powerful microscopes, you'd be able to see things 100 million times smaller: bacteria, viruses, molecules—even the atoms in crystals would be clearly visible to you!

Ordinary optical microscopes (light-based microscopes), like the ones you find in a school lab, are nowhere near good enough to see things in such detail. It takes a much more powerful electron microscope—using beams of electrons instead of rays of light—to take us down to nano-dimensions. Let's take a closer look at electron microscopes and how they work!

Photo: This Hitachi S-4700 field-emission, scanning electron microscope can magnify over half a million times and resolve features just 2 nanometers across! By courtesy of NASA Glenn Research Center and Internet Archive. 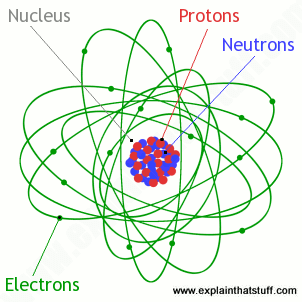 Photo: Inside an atom: electrons are the particles in shells (orbitals) around the nucleus (center).

We can see objects in the world around us because light rays (either from the Sun or from another light source, like a desktop lamp) reflect off them and into our eyes. No-one really knows what light is like, but scientists have settled on the idea that it has a sort of split personality. They like to call this wave-particle duality, but the basic idea is much simpler than it sounds. Sometimes light behaves like a train of waves—much like waves traveling over the sea. Other times, it's more like a steady stream of particles—a bombardment of microscopic cannonballs, if you like. You can read these words on your computer screen because light particles are streaming out of the display into your eyes in a kind of mass, horizontal hailstorm! We call these individual particles of light photons: each one is a tiny packet of electromagnetic energy.

Seeing with photons is fine if you want to look at things that are much bigger than atoms. But if you want to see things that are smaller, photons turn out to be pretty clumsy and useless. Just imagine if you were a master wood carver, renowned the world over for the finely carved furniture you made. To carve such fine details, you'd need small, sharp, precise tools smaller than the patterns you wanted to make. If all you had were a sledgehammer and a spade, carving intricate furniture would be impossible. The basic rule is that the tools you use have to be smaller than the things you're using them on.

And the same goes for science. The smallest thing you can see with a microscope is determined (partly) by the light that shines through it. An ordinary light microscope uses photons of light, which are equivalent to waves with a wavelength of roughly 400–700 nanometers. That's fine for studying something like a human hair, which is about 100 times bigger (50,000–100,000 nanometers in diameter). But what about a bacteria that's 200 nanometers across or a protein just 10 nanometers long? If you want to see finely detailed things that are "smaller than light" (smaller than the wavelength of photons), you need to use particles that have an even shorter wavelength than photons: in other words, you need to use electrons. As you probably know, electrons are the minute charged particles that occupy the outer regions of atoms. (They're also the particles that carry electricity around circuits.) In an electron microscope, a stream of electrons takes the place of a beam of light. An electron has an equivalent wavelength of just over 1 nanometer, which allows us to see things smaller even than light itself (smaller than the wavelength of light's photons).

If you've ever used an ordinary microscope, you'll know the basic idea is simple. There's a light at the bottom that shines upward through a thin slice of the specimen. You look through an eyepiece and a powerful lens to see a considerably magnified image of the specimen (typically 10–200 times bigger). So there are essentially four important parts to an ordinary microscope:

In an electron microscope, these four things are slightly different. 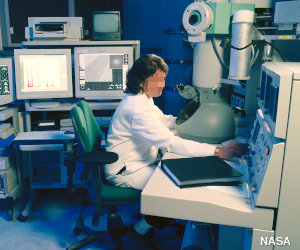 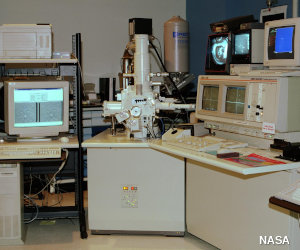 A TEM has a lot in common with an ordinary optical microscope. You have to prepare a thin slice of the specimen quite carefully (it's a fairly laborious process) and sit it in a vacuum chamber in the middle of the machine. When you've done that, you fire an electron beam down through the specimen from a giant electron gun at the top. The gun uses electromagnetic coils and high voltages (typically from 50,000 to several million volts) to accelerate the electrons to very high speeds. Thanks to our old friend wave-particle duality, electrons (which we normally think of as particles) can behave like waves (just as waves of light can behave like particles). The faster they travel, the smaller the waves they form and the more detailed the images they show up. Having reached top speed, the electrons zoom through the specimen and out the other side, where more coils focus them to form an image on screen (for immediate viewing) or on a photographic plate (for making a permanent record of the image). TEMs are the most powerful electron microscopes: we can use them to see things just 1 nanometer in size, so they effectively magnify by a million times or more. 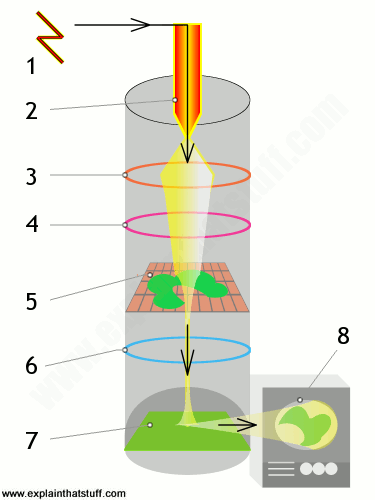 A transmission electron microscope fires a beam of electrons through a specimen to produce a magnified image of an object.

Most of the funky electron microscope images you see in books—things like wasps holding microchips in their mouths—are not made by TEMs but by scanning electron microscopes (SEMs), which are designed to make images of the surfaces of tiny objects. Just as in a TEM, the top of a SEM is a powerful electron gun that shoots an electron beam down at the specimen. A series of electromagnetic coils pull the beam back and forth, scanning it slowly and systematically across the specimen's surface. Instead of traveling through the specimen, the electron beam effectively bounces straight off it. The electrons that are reflected off the specimen (known as secondary electrons) are directed at a screen, similar to a cathode-ray TV screen, where they create a TV-like picture. SEMs are generally about 10 times less powerful than TEMs (so we can use them to see things about 10 nanometers in size). On the plus side, they produce very sharp, 3D images (compared to the flat images produced by TEMs) and their specimens need less preparation. 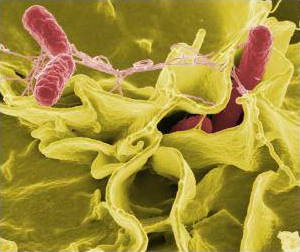 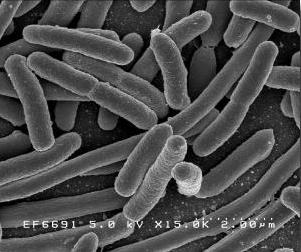 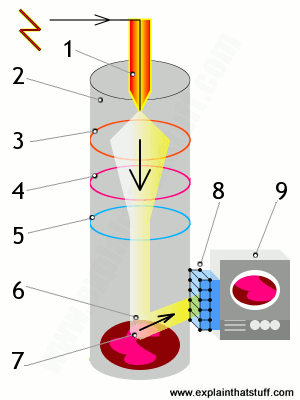 A scanning electron microscope scans a beam of electrons over a specimen to produce a magnified image of an object. That's completely different from a TEM, where the beam of electrons goes right through the specimen. 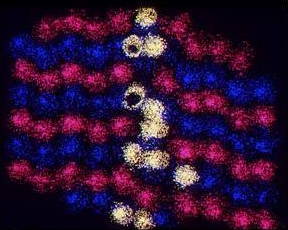 Photo: An STM image of the atoms on the surface of a solar cell. By courtesy of US Department of Energy/National Renewable Energy Laboratory (NREL).

Among the newest electron microscopes, STMs were invented by Gerd Binnig and Heinrich Rohrer in 1981. Unlike TEMs, which produce images of the insides of materials, and SEMs, which show up 3D surfaces, STMs are designed to make detailed images of the atoms or molecules on the surface of something like a crystal. They work differently to TEMs and SEMs too: they have an extremely sharp metallic probe that scans back and forth across the surface of the specimen. As it does so, electrons try to wriggle out of the specimen and jump across the gap, into the probe, by an unusual quantum phenomenon called "tunneling." The closer the probe is to the surface, the easier it is for electrons to tunnel into it, the more electrons escape, and the greater the tunneling current. The microscope constantly moves the probe up or down by tiny amounts to keep the tunneling current constant. By recording how much the probe has to move, it effectively measures the peaks and troughs of the specimen's surface. A computer turns this information into a map of the specimen that shows up its detailed atomic structure. One big drawback of ordinary electron microscopes is that they produce amazing detail using high-energy beams of electrons, which tend to damage the objects they're imaging. STMs avoid this problem by using much lower energies. 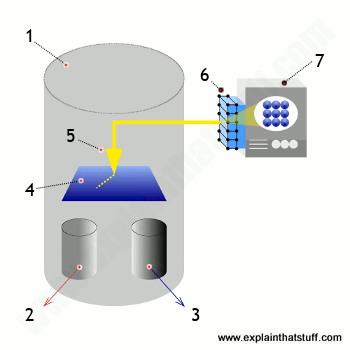 A scanning tunnelling microscope makes images using electrons that "tunnel" between the probe and the specimen. Here's how it works:

down to almost absolute zero by a cryogenic source, such as a liquid helium refrigerator.

If you think STMs are amazing, AFMs (atomic force microscopes), also invented by Gerd Binnig, are even better! One of the big drawbacks of STMs is that they rely on electrical currents (flows of electrons) passing through materials, so they can only make images of conductors. AFMs don't suffer from this problem because, although they use still tuneling, they don't rely on a current flowing between the specimen and a probe, so we can use them to make atomic-scale images of materials such as plastics, which don't conduct electricity.

An AFM is a microscope with a little arm called a cantilever with a tip on the end that scans across the surface of a specimen. As the tip sweeps across the surface, the force between the atoms from which it's made and the atoms on the surface constantly changes, causing the cantilever to bend by minute amounts. The amount by which the cantilever bends is detected by bouncing a laser beam off its surface. By measuring how far the laser beam travels, we can measure how much the cantilever bends and the forces acting on it from moment to moment, and that information can be used to figure out and plot the contours of the surface. Other versions of AFMs (like the one illustrated here) make an image by measuring a current that "tunnels" between the scanning tip and a tunneling probe mounted just behind it. AFMs can make images of things at the atomic level and they can also be used to manipulate individual atoms and molecules—one of the key ideas in nanotechnology. 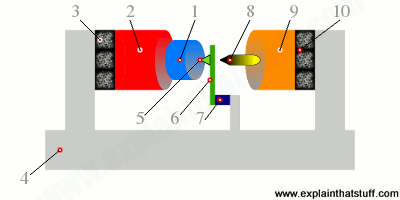 An atomic force microscope is similar to a scanning tunnelling microscope, but makes images using a tiny cantilever probe that's wiggled about by the force between itself and the specimen. Here's how one version works:

Artwork: How Gerd Binnig's original AFM worked—greatly simplified. Based on an original drawing from Gerd Binnig's US Patent 4,724,318: Atomic force microscope and method for imaging surfaces with atomic resolution.

Here's a brief history of the key moments in electron microscopy—so far!

A patent search is a good way of finding deeper technical details and drawings. Here are a few key patents for starters: